His return to CS:GO was foreseen under the mTw banner, but a sponsor pulled out and Danny ”zonic” Sørensen instead became coach in Team Dignitas.
Looking back he has no regrets, but had he known the future for CS:GO his life choices would’ve been quite different..
– I would definitely not have stopped, Zonic tells Aftonbladet Esport.

Danny ”zonic” Sørensen is one of the 1.6 greats, known for his time in teams such as mTw, NoA and Mousesports. Throughout his life as professional gamer he has won prestigious tournaments like Dreamhack, ESWC and World Cyber Games. In the early summer of 2012, shortly before Counter-Strike:Global Offensive was to be released, Zonic put his gaming career on hold.
– I didn’t like the game at that time, but I think it has improved a lot. I wasn’t certain if it was going to be something big and due to school I didn’t want to invest so much time into playing, to learn a whole new game. Because I can’t just play 50 percent or 75 percent, I need to play 110 percent. If I had started playing I would’ve spent around 12 hours a day, Zonic tells Aftonbladet Esport.

About three years later Zonic’s comeback was announced. As the new coach for Danish Team Dignitas his new mission was to help the young team grow and prosper. His first meeting with Jacob ”Pimp” Winneche, Andreas ”Schneider” Lindberg and the other team members was at the recent Dreamhack Stockholm event where they managed to qualify for the next major in Cluj-Napoca, Romania.
– It’s been really great, they are really cool guys. When I look at them and when I’m with them I can see that I’ve become really old myself. I’m 29 now and we have a player like Markus ”Kjaerbye” Kjærbye who’s 17, so I could basically be his father, Zonic says with laughter and continues:
– Kidding aside, it’s been really fun and I enjoy being with them. This is my first event with them and otherwise I’ve been coaching them online in practice and official matches. Looking forward to come to more events with them.

Yet, his plan at first was not to become a coach. In early 2015 rumors spread that Zonic and some of his old 1.6 colleges were returning under the mTw banner. They had been approached by a German sponsor, and the team building was in fact very real.
– He was a bit nostalgic so he wanted to get the mTw 2008 lineup. We tried to get as many of them as possible, but we pretty much came out with the mTw 2010 lineup. Unfortunately one week before we had to go down to Germany to sign the contracts they visited Katowice and decided to host events instead of sponsoring a team. So that was pretty much destroyed.

”They need these last 10 percent”

Besides coaching Team Dignitas, Zonic has a lot of other commitments on his schedule. He recently became a father. He’s getting a masters degree in business school. On top of that he’s also got a job. Still, during his so far short time in Dignitas he’s got an idea what the team needs to work on.
– When I saw Dignitas in the beginning I saw a really talented team with really great players, but they need these last 10% to enter the state as a real top team. I talked a little bit with Kjaerby and some of the others, and some of their main issues were communication and after plant situations. All these small things, but yet important things that a team should master.

The new meta of CS:GO

When the 1.6 veteran was still active as a gamer, his team mTw were known for their tactical knowledge. In the game’s current meta Zonic thinks many teams lack a tactical approach, but at the same time he thinks the game can develop to become more tactical based, much like the way 1.6 evolved.
– I think that we might see the same here, that eventually teams will pick up some really great tactics which will force the other teams to adapt. I think we’re in a early stage of the game still and I think it will become more tactical. It might not be that everyone needs to know how to throw certain flashes and know the detailed tactics like we did in 1.6, but I think that people will exploit the game a lot further.

Do you think we could see a switch soon?
– I can’t see the time perspective, it might be a year and it might be more. I don’t know. The big threat towards getting a more tactical game is that the maps seems smaller and it doesn’t take that long to come from A to B and all that. That might have an impact, but I think we’ll see more detailed strategies in terms of flashes and smokes and all that.

While Zonic’s prediction of the future meta is plausible, other professionals, such as Fnatic’s coach Viktor ”Vuggo” Jendeby, says more firepower is needed. One way to move towards both is to bring in a 6th player and put the in-game leader behind the squad.
– Personally I think due to the technical aspect that now you can actually have a coach in-game, and with the whole setup on LAN as well, I hope the future of CS:GO would have a coach standing behind. Like we see in football managing all the tactics. I think it’s a good idea.
– I think it’s a step for a lot of teams and they should definitely think about it.

”If I knew that it would be this big…”

Zonic quit playing just before CS:GO was released. He didn’t like the game and didn’t know how big it was going to become.

Do you regret that decision today?
– Both yes and no. I regret it in the fact that CS has become a huge part of esports now. All the travel and possible prize money has increased a lot. If I knew that it would be this big I would definitely not have stopped back then. But at that time it was still the right decision, so I don’t regret it.
– In early 2012 I stated that CS:GO wouldn’t be as big as 1.6 in this decade and I still think that. Because 1.6 is like 14 years old and it was a huge part of the scene. Anyone you asked had played 1.6 or counter-strike in general. So even though there’s a lot of prize money – you can also see the financial crisis has passed which I think has something to do with the amount of money that has been thrown into this game – I still think it needs a couple of more years before we’re there.

If you could do it all again, is there anything you would’ve done differently?
– I think I would’ve asked my mom to given birth to me 10 years later. Then I would’ve been 19 and getting ready for the scene, Zonic says laughing and continues:
– No I don’t regret anything. I’ve been a part of throwing out some players that were really good friends of mine in real life, but looking back I think most of the decisions have been the right decision even if they’ve been tough. I regret not celebrating enough when we were winning tournaments afterwards. 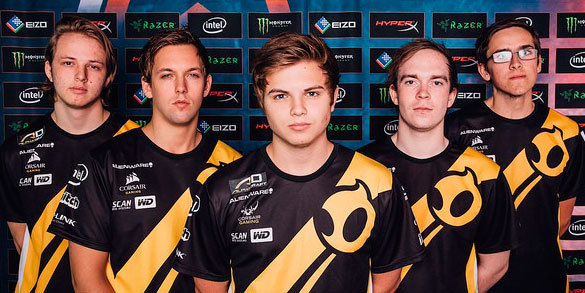