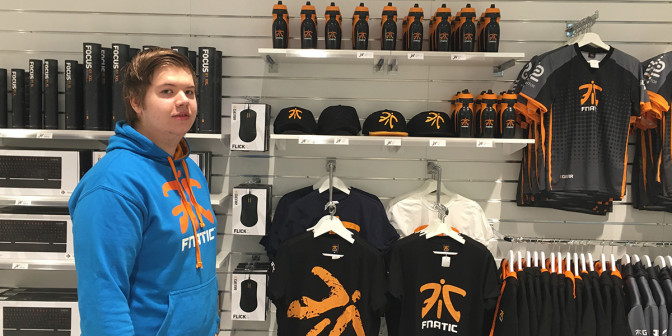 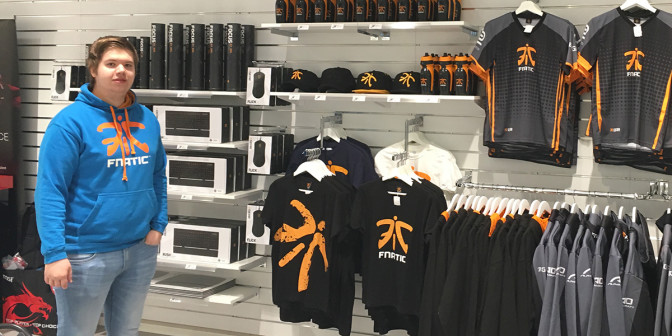 In his everyday life, Jesper ”jw” Wecksell is a world famous esport athlete.
His profession takes him across the world facing of against the best players in CS:GO.
However, as of today he can also call himself a business man and store owner.
– Obviously it feels amazing, the Swedish mega star says to Aftonbladet Esport.

As you travel through the Swedish country side, you could easily miss the exit just as you pass by a gigant Dalahäst. Yours truly happened to drive several miles so far as I was heading to Jesper ”jw” Wecksells brand new project in his home town of Avesta.

After a few phone calls, a quick look at the non functioning GPS I eventually stumbled upon a quiet and picturesque town in the hearth of Sweden. In the small city mall in Avesta, one of the biggest stars in the world of esports have opened a unique little shop known as JW Gaming. The star himself tells Aftonbladet Esport that there are several reasons behind the investment, among many is how he would like to educate parents and people who are unbeknownst of what esport is and how gaming in general works.
– I would love to be able to tell the parents what their kids are doing as they spend up to ten hours a day in front of a computer screen. Parents might not know that their kids sit in huge conversations with up towards 20 people talking at same time, they might not fully understand how socially engaging gaming can be and, foremost, understand what esport is.

The superstar quickly adds that kids shouldn’t let school and their education suffer due to gaming, but at the same time the digital world can be a haven for people who might have a hard time at school.
– Even though my everyday profession is to be a professional CS:GO player, I’d love to be able to visit the shop as often as I can. I hope to be able to go there especially on Fridays and Saturdays when we usually don’t have practice or official games.

”A sport boutique for esports”

What Wecksell have created is to some degree unique in the industry. More or less no other professional CS:GO player have ever ventured in to this territory. Having invested a notable sum of the money he have gathered through all of Fnatic’s success, he hopes that his concept will turn out as prosperous as the last few years in the Swedish roster. But that is, at least in the beginning, not the main goal for the AWP star.
– Even though I’d obviously like make a return on my investment, this shops represent the community, we create it together. I’ll be listening a lot to every feedback I receive from players and those active in the gaming community to hopefully improve the shop and perhaps be able to spread the concept to other cities.

As July roles around, JW Gaming aims to open its web shop. Until then people will only be able to buy the stuff the store has to offer in the small mall in the middle of Avesta.
– My goal is to turn this in to a sport boutique for esports. Right now, which is kind of obvious, there’s mostly Fnatic merchandise in there. But I want to make it so that a esport fan who supports which ever team will be able to buy the jersey of his favorite player – independent on which team that player might represent. I’ve read threads on the internet that some guys would walk in to the store and hang Ninjas in Pyjamas jerseys in the shop, in fact no one would be more happy than if I was able to do that.

On that note, yours truly wanted to venture in to a story that happened about a year ago. When Ninjas in Pyjamas made the decision to let Mikail ”Maikelele” Bill go they, as everybody knows, picked Aleksi ”allu” Jalli to take his place. NiP would eventually face their Swedish rivals in the grand final of ESL Katowice 2015, however – they could have done so with jw on their squad if everything would have worked as planed.
– It is correct. NiP wanted to have me, and I wanted to join them. I wanted to try something new, the famous players says and continues:
– Many might have had a hard time seeing me in a NiP jersey considering everything that have happened. What transpired at that moment many years ago is a closed chapter, especially when you consider that it was the guys in Ninjas in Pyjamas who wanted me to join. At the same time I would have loved to be able to play with Patrik ”f0rest” Lindberg and Christopher ”GeT_RiGhT” Alesund. Eventually it didn’t turn out that way, and when looking back at it – it might have been for the best.

As it stands, Olof ”olofmeister” Kajbjer is still sidelined due to his injury. Fnatic recently tried out Niclas ”PlesseN” Plessen who would later be swapped out for John ”wenton” Eriksson. They have had a bit of a hard time since olofmeister took his well deserved rest.
– The major in the USA was a bit of a wake up call for us. We probably had a little bit hybris as we went in to the tournament. If it wouldn’t have been a major I don’t believe Olof would have forced him self to play in the quarter finals and shortly after the tourney we had a meeting in the roster. We knew that olofmeister would take a brake, but we also said that we would have to start all over again and fight even harder.

But before the glory days of Fnatic will be upon us again, jw hopes that more people will make it to his new, unique, little shop in the small town of Avesta and while there be able to visit probably the worlds first fully dedicated esport store.