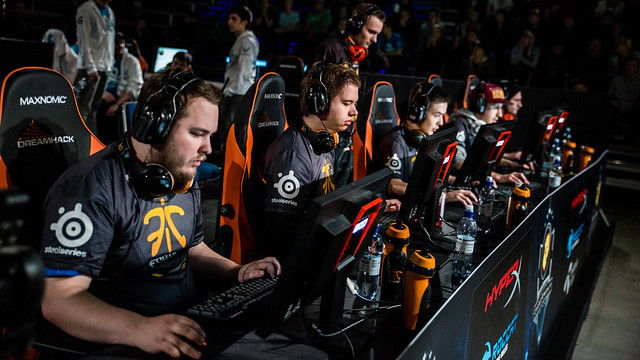 The CS:GO-scene was shocked when Hovik ”KQLY” Tovmassian and Gordon ”Sf” Giry got caught by Valves anti-cheat system. After ESEA declared that more bans was on it’s way, accusations against other players started to drop both left and right – and especially Robin ”Flusha” Rönnquists name have been circulating all over the place. Now Fnatics ingame leader, Markus ”pronax” Wallsten voices his opinion on the matter.
– I know that he hasn’t cheated, I play with him every day, he tells Aftonbladet Esport.

Everything is as it should be. Thousands of fans, thumping base sounds and frenetic clicking on keyboards through out all of the conference site. Dreamhack Winter is under way.

The one major difference is that Counter-Strike Global Offensive probably never have been more popular. The official stream have been notching up close to 200 000 concurrent viewers. Numbers we’ve never seen outside of grand finals.

At the same time we are witnessing a scene which has been shaken to its core. The two French players Hovik ”KQLY” Tovmassian and Gordon ”Sf” Giry was VAC-banned and their teams, Titan and Epsilon, was disqualified from Dreamhack Winter. Along side the bans, ESEA declared that more bans was in the pipeline. Bans we at the time of writing this article we still haven’t seen.

However, the accusations have been poring down all over the scene. Several players are under scrutiny from the community, and no one more than Robin ”Flusha” Rönnquist. Ninjas in Pyjamas coach went public that he didn’t want to se the Swede in the tournament, and the LDLC-player Richard ”shox” Papillon said during a stream that he was sure Flusha was cheating.
– It’s been horrendous, Fnatics ingame leader, Markus ”pronax” Wallsten tells Aftonbladet Esport and continues:
– I know there are a lot of people who believe that he’s been cheating and there are several more who believe he is legitimate. But it is the ones who question him that are the loudest. I know that he hasn’t cheated, I play with him every day.

How have the routines looked for the players during the tournament?
– They have implemented a lot of measures to ensure nobody is cheating. We have to hand them our phones and we no internet connection on the computers. We only have access to Steam, and I’m convinced that they have some sort of software scanning wether you are installing something. They even take your jacket so that players can’t sneak in any USB-memories.

Fnatic played brilliantly against Bravado Gaming but then looked out of place in their game against Hellraisers in which they lost 16-14 on Mirage.
– We simply played like crap against Hellraisers. I made a lot of bad calls and that lost us the game, pronax told Aftonbladet Esports after the teams victory over Cloud 9.

You are, by many, considered to be the best ingame leader in the world at the moment. What would you say makes you this good?
– In all honesty, I don’t know. First of all there are many ingame leaders who are very strict and tell their players exactly what to do. I want my players to make their own decisions, and I also want them to believe that it is their decisions that matters – so they believe that they play like they want them self and not like I want them to play.

Considering how much each game in the group stage mattered, how much of your tactical arsenal have you shown the world?
– We have a lot left in the tank, pronax says with a little smirk on his face.

At the time of writing this article it is still unclear who Fnatic will face in the playoffs. But their coach, Jonatan ”Devilwalk” Lundberg is convinced that no team will be able to stop them.