My next trip already begins at 07:30, one day after I have come home from DH Tours. It is a lot of
travelling right now and I am exhausted but that does not stop me! I am very happy to see my team again and I feel that if you fight for something hard enough you actually can go wherever you want –and I am well on the way there. I had packed a little the day before so I figured I would pack the last things following morning, but I panicked when I got on the train, feeling as if I had forgotten something. I always worry about trivial stuff.

At last I reach my destination; Uppsala Centrum, where Steelya is waiting for me. The weather was
really bad and we were cold but luckily enough it did not rain! I grab one of Steelya’s bags and put it
on top of my own (since we are both tiny and weak, at least I am) so I figured we would go for some
teamwork by now so she does not have to carry it all by herself. We try to find our ride (The Girl
League) so we wander about for a while. We find them and drive straight to Birdie where the others
are already.

The first thing I do when I arrive is to open my bag to check if I had forgotten anything and I had not,
what a relief. We start to plug all of our gear in and warm up a little bit, but some of us wanted to go
to the hotel and leave our stuff. And perhaps eat something; the clock was 13:00-14:00, mind you. I
had only eaten breakfast so I was very hungry. We girls headed to the hotel and we had about an
hour to get changed and so on. We decided to go to ICA before we headed back to Birdie, and indeed
as the LAN’ers we are, we only brought back unhealthy stuff except Steelya who went for apples. 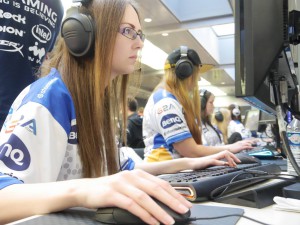 The longer I wait, the more pumped up I get to play. After we had eaten we went straight to Birdie
again to warm up. We were going to have a match at 18:00 (if I am not mistaken) and because of our
match we missed out on the dinner with the other girls from The Girl League, which was a pity
because we really wanted to take part in it. Our first competition came forward, they were young
and rather cute, but alas we crushed them pretty hard. The second competition was a little better
but we managed to take them on as well. But with the third competition we started to run into
problems. They took round after round and we were lost, they were simply better on everything.

The fourth game we won on WO and now we had to wait for our last match that was being played 03:00 at night (I think it was?). It did not go to well, we were completely run over. All of us were tired and we could not manage to focus to one hundred percent. I suppose it is not an excuse that we lost because I certainly believe the other team was just as tired. They were simply better than us.

Right now I just long to get some sleep, it would be so nice to just lay in bed and rest. The other days consisted only of practicing and community. We all get along incredibly well and we have lots of fun most of the time, which I find very nice. Oh right, Mouse did a shootout too, she did very well considering the circumstances.

Well, that was all from me!