Once again we are back with the ”who are you” series of articles, this is the fourth article of many to come. In this series we interviewed our Social Media expert Joachim Rittfeldt Hofvenschiöld and asked him what he does in NiP and how he started gaming.

How I started gaming
My dad gave me around 6 or 7 different Game & Watch which he had been using a few years back when it was popular. I thought these games were pretty simple but fun and epic but I needed something more challenging. That’s when I got my hands on the first Gameboy, the Gameboy white.  I found this in a box in the attic along with about 5-10 different games. My dad had almost forgotten this beauty but when I got my hands on it, I started playing right away. My favorite games were Super Mario and Tetris. Me and my dad raced a little with each other, he ”tried” to play sometimes, but he really thought it was funny as hell, which he still thinks.

The time went on and my dad used to subscribe to PC Gamer and you always got a CD with that magazine, and in most of these CD’s there was always games included, FPS games, RPG games, racing games, you name it. There was all kind of games in those CD’s but they were only trials so I always thought it was so boring when they the demo was finished (which I finished rather quickly). During this time I had a pretty crappy computer and the internet connection was not the best either. But after a few years I got a real computer which I could play better games on and thats where it all took off.

Working with gaming
I used to play a lot of Unreal tournament and Quake when they both came out and from one game to another I started playing Counter-Strike Source when the game was released I played it on and off for years. I played the game at semi-professional level, to mention a few teams I played for, Epsilon-Esports, Rasta-Gaming, zeroPoint, etc. There was a time during 2007-2008 I got really bored by playing CSS and found this new cool game Teamfortress 2, I started playing TF2 for a couple of years and played at a fairly high level.  I lost the motivation for TF2 and thought of coming back to playing CSS instead and so I met a Australian player named Aaron Stenlake, he had heard of my previous experience with managing teams and playing with semi level teams and was really interested in picking me up as their manager. And in a matter of seconds I was a manager instead of a player.

The team I was managing got picked up by Mindfreak Esports just about a week or two after I joined the organization and we quickly became great friends and I became more of a Marketing Manager rather than a Manager for the team. This is were my journey of esports began, after Mindfreak I joined Quantic as the same role I had at MF and then I continued my journey in Epsilon-Esports.

Gaming today
Right now I am not gaming all that much more than a couple of match makings in CSGO or a few Dota 2 games with friends. I also play a few Hearhtstone games or playing console every now and then together with my girlfriend.

Outside of gaming
I work for NiP part-time and studying to International Marketing and Sales manager in university full time. But my big passion besides NiP is cooking, I love to challenge myself and cook different dishes from places all around the world. When I come to a new country I love to try out their food to see if I can mix in their food culture into my cooking. I also love to lay up nicely on the plate to make it look good for photos. Photography is also a passion I love in life. I usually photo esports events but also my food of course, urban environments, nature and so on. Hanging out with friends, editing movies with friends and hanging out/editing movies with my girlfriend is something I also do on my sparetime. 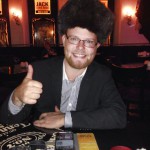