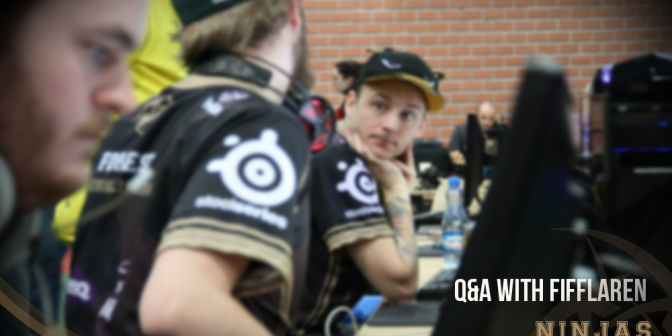 Last man standing is none other than fifflaren himself. What secrets lie behind his GUNNAR shades? We asked him 13 of the questions that you guys posted on FB to find out;

1. What headset do you usually use?

When I’m playing at home I use a Steelseries 9H Wireless headset but at tournaments I use Siberia V2.

2. What got you to start playing CS?

My friends back in the day played a lot of CS when I was still deeply into Diablo 2: LoD, they had me try it and I didn’t really like it that much at first, but the more I played the game, the more it grew on me!

3. Do you drink coffee when you play? Does it affect you?

Yes I do! Always a double espresso before an official game! It gets me more focused and my brain functions a bit better 😉

4. What do you do when you practice? Do you just play or do you plan in advance?

A bit of both, if we don’t have any official games during the day we are practicing, then most of the times I will just logon and practice, if we do have official games I try to play some before to get warmed up.

5. What kind of music do you listen to? Which is your favorite musicband?

I listen to all kinds of things, but my favorite band is Shinedown! Amazing band.

6. How do you train to improve with an AWP (for someone who plays CS already)?

I’d say just to play with it more. When I started to play with the AWP it helped me a bit to DM, but the real practice is during practice games, or official matches. People tend to run around a bit more when it’s not a real game, so it’s very hard to get some ”real” practice in.

7. What is the story behind your nic? How did you come up with ”fifflaren”?

Good question, back when I was younger I used to call a friend of mine ”kamerafifflare” Which is a bit hard to translate, but I guess it’s something close to ”Camerafiddler” And then I kinda made it my nickname instead because I thought it sounded cool

8. How old where you when you started playing?

9. What job would you like to do if you were not gaming?

I have a pretty good work resume in Service Management, so that is probably something I would go back to when I’m done with gaming!

10. Which is your favorite map, and why?

I really liked train, but nuke and inferno are also very good maps!

11. Who is the best player that you have ever played against?

12. What country (where you haven’t been yet) would you like to visit?

I always wanted to visit an Asian country! Haven’t had the pleasure to do so yet 🙂

majk, my old brother in arms <3