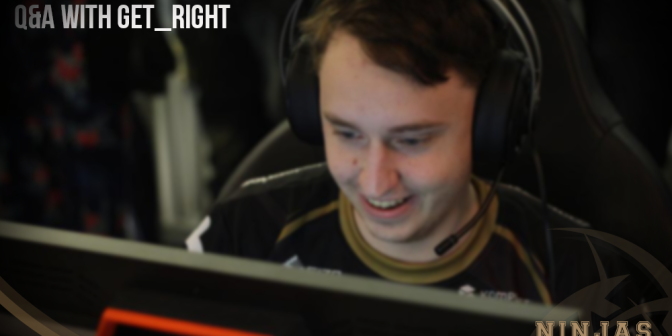 Finally time for our second Q&A, where we interview the players using questions sent in by the NiP fans on our NiP Facebook page. First man up is none other than Christopher ”GeT_RiGhT” Alesund. Here is what you guys asked him and what he had to say:

1. What is your favorite weapon in CS:GO?

My favorite weapon is AK-47, since I’m a ”spray player” and really like to get some weird ’recoil’ when your spraying with AK.. Even tho, I’d take over the AWP role any given day if my guys asks me to play it! 🙂

2. What makes a ”good” player according to you?

A good player, is someone that has a better overview about the game. Know how to control yourself under big pressure and be performing well under all situations.

3. Which other player (not counting NiP) do you think is the best?

I don’t know, there is a lot of players out there who are really good and possibly the best.. But if I have to give a X player that vote it would go to krimz from fnatic.

4. What is your favorite holiday destination?

Oh.. hmm.. I don’t know, doesn’t it really tell how I don’t go on vacations that much since I’m white all the time :D?

5. Do you have any tips for young players who want to go pro?

Play play play.. Just play! I don’t have any real advice other than play a lot. Since, that’s how I did it pretty much.. 😀

6. What are your thoughts on DHW14? Do you have any new tactics?

It’s gonna be a hell of a good tournament if you ask me! It’s going to be very interesting to see who will make it into top3, I’d just hope we are one of those teams! New tactics..? What is this?! No, but we’ll work as we’ve been doing for a while now. Teamplay and new things that’s coming into next tournament!

7. What would you like to do when you retire from CS? Would you still want to be in e-sports?

I don’t know, I’d hope I’m still in eSport since it’s something I think I’ll do really good.. But who knows, maybe I’ll be a chef ! 😉

8. In some matches you do these amazing things, are those things you plan ahead or do you just do them spontaneously?

I do hope that I have some magic left in my CS skills, but it hasn’t been shown for a time now. Even tho, I try to work to get myself back up there! But, when those things happens. I don’t think anyone of the PRO Players can really say something regarding it.. I guess it’s more of a spontaneously thing that just happened there!

9. How many years do you think (approximately) it takes to go pro in a game?

Hard question! It depends on how much you do to really become a Pro player in X game.. For exampel, to play 1.6 it was really hard to come from a region like Sweden, since we have always been having strong players from that region.. So take a place in a team like fnatic or SK back in the days.. Were super hard! But, I don’t think you should never give up on the dream tho..

10. How do you usually warm up before a game?

Abit of DeathMatch and listening to a good spotify list can get you in a good mood before agame!

11. Which is your favorite skin?

12. Which other team are you most excited to play against?

13. What was your main feeling after ESL?

Happiness! Nothing more to add to that haha..

Please note that these 13 questions were chosen out of the grand total, which is why you might not find your specific question amongst the 13.